The Camel Stitch (or Half Double Crochet in the Third Loop) is a beautiful and elegant way to add texture to your crochet work.

If there is something that makes the half double crochet a pretty unique stitch, that is the third loop!

Why Crochet in the Third Loop?

The main reason why you should consider crocheting in the third loop is texture! But it is not the only one…

Find HERE a few crochet patterns that use the camel stitch!

What is the Third Loop?

Like every other crochet stitch, the half double crochet has two top loops, the front loop, and the back loop. These are the loops in which regular crochet normally happens.

However, on the wrong side of a half double crochet stitch, you’ll find one extra loop compared to the other crochet stitches. This is the third loop.

How does the Third Loop Form?

The reason why that third loop or horizontal bar exists is that when you make a half double crochet, you first yarn over, then insert your hook into the indicated stitch, pick up a loop, yarn over and draw yarn through all three loops at once.

In the photo below, you can compare half double crochet and single crochet stitches on the wrong side.

Where is the Third Loop?

The third loop is always on the back of a half double crochet.

When you crochet flat, turning your work at the end of each row, then, the third loop will always be in front of you.

How to Crochet in the Third Loop

Once you are familiar with the stitch anatomy of a half double crochet, crocheting in the third loop is really not complicated.

Yo, and identify the third loop of the first hdc (see black arrow in the photo below).

Insert your hook under the third loop from the bottom up.

Little Side Note. If you are crocheting in the round without turning your project, then you will have to insert your hook into the third loop from the top!

Yo, and pull up a loop. Yo, pull through all three loops on your hook to complete your hdc (not shown in the picture below).

After a few rows of third loop hdc, the texture of your project will look like the one shown in the photo below.

However, there are many stitch combinations that use the third loop to create many different textures!

How to Crochet the Camel Stitch in the Round

The easiest way to understand how to crochet the camel stitch in the round is to see a few practical examples.

This example comes from the Sweet Baby Beanie, which is crocheted in the round by working half double crochet in the third loop.

The first round of the Sweet Baby Beanie is made by working 11 hdc in the MC (photo 1).

From Round 2, you’ll need to work your hdc increases in the third loop.

In the beginning, especially for the first st, it might be helpful to flip your work to the wrong side (photo 2). This way, you can clearly see the third loops.

Then, turn your work to the right side again, and crochet your sts (photos 3 and 4).

Finding the third loop for all the other sts will be way easier. You can just slightly tilt your work towards you and you’ll find the third loops (photos 5 and 6).

Hdc in the Third Loop vs. Regular Hdc

In the example below, I worked the first half of my second row by making my hdc stitches in the third loop. On the other hand, the second half of the row is worked regularly into the top two loops.

Now, look at the panel on the bottom to appreciate the textured effect that you get when you crochet in the third loop!

I hope that you enjoyed this tutorial on how to crochet the Camel Stitch! 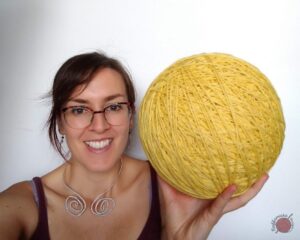